4th local and regional workshop on coworking in the Med area 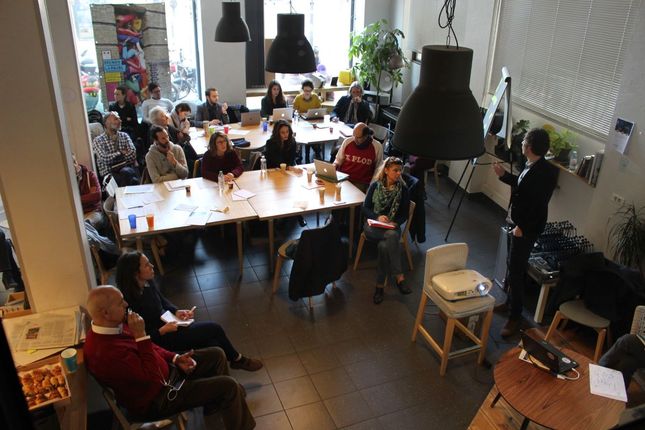 On the 20th February 2018, the PACA Regional Council, partner of the European project COWORKMed led by the AVITEM, organized a local and regional workshop at Mars Medialab in Marseille on the theme: "Towards a Euro-Mediterranean network of coworking?". The event brought together some thirty participants, most of whom were leaders and animators of coworking spaces and representatives of regional public actors.

The morning took place in two sessions. First a round table with local coworking specialists, then working groups were constituted around different "projects" to think about the creation of a Mediterranean coworking network.

The debate was introduced by some reminders about the nature of the third places, these hybrid spaces between private and public, including coworking spaces. These are generally characterized by a desire for permanent openness to novelty, for being constantly rethought. This results in structures both agile and fragile. As for the activity that these hold, coworking, it is the emanation of new ways of working, more independent, less localized, more connected. Paradoxically, this independence implies a growing need to "do together", hence the emergence of communities organized in third places. In addition, the growing nomadic work makes space become a key issue. Thus Society and its patterns are changing profoundly.

However, a difference of nature remains, between these places and public powers, in the modes of action. And this hinders these new trends to be supported while they need it. On the basis of these observations, any public action may indeed seem unsuited as unable of grasping a changing and unclassifiable phenomenon which affects several aspects of our shifting societies. It is therefore necessary to rethink the bridges with public action, to make them better adapted to these new phenomena. This certainly will be a win-win evolution since coworking spaces become real local economic hubs.

The challenge is thus to find a public action that can benefit several places. Public actors could take on certain tasks, such as management or animation, which are very heavy for the collectives. Their support should make it possible to get organized at local but also transnational level. A relevant Mediterranean coworking network would make it possible to develop cross-cutting initiatives and services, as well as to respond to a real appetite for a Mediterranean network among local actors, based on economic, but also social and human expectations. Public powers would also play an amplification role, like a sounding board, within their zone of influence.

The participants then formed groups and worked on five "projects". During the feedback session, proposals were made: create a database on coworking, connect third places, define a charter of coworking values, receive European officials in coworking internship or open coworking spaces dedicated to nomadic agents of the public service. The work sessions were rich, and each group was very creative.

Promote exchanges and immersions in the world of coworking

The recurring point of these proposals was to provoke meetings, immersions between institutions and users of third places, to better understand the issues on both sides. In short, reiterate, extend and formalize the exchanges that took place that morning. We can therefore conclude on a very successful, productive and friendly meeting, with real exchanges and real proposals, and the incarnation more and more tangible over the morning of a real need for a network, both local and transnational.